Finally the trip that we have all been waiting for has come true – the Fellows Program’s final excursion to Cape Town, South Africa. The 19-hour journey from Helsinki took some of our energy but we managed to get to our destination in good mood and excitement. We were ready for the week and thrilled about the opportunity to learn about Cape Town’s and Africa’s start up ecosystem and culture. The public transportation in the area was terribly poor and dangerous so we chose rental cars and Uber as our way of traveling within the city during the week. After renting two cars for the week, we drove a wild ride in Cape Town’s left-sided traffic from the airport to the city center – it soon became quite obvious that this place has a bit different mentality in terms of safety and way of life than in Helsinki. But nevertheless, the weather and the place in general is nice!

There was no room for much sightseeing in the beginning as we had to head out to our first excursion right after we arrived to our hostel. The visit to Woodstock district to see PwC and the Bandwidth barn start up accelerator was a brief drop by, but even so very mind opening. The venue was renovated recently and provided modern and new working spaces for high growth entrepreneurs. We got excellent first hand insights of the South African ecosystem and key players and also got a few new contacts in Cape Town to visit. The excursion acted as a good intro to what’s about to happen in the rest of the week.

After PwC we took Uber’s to outside of town to Groot Constantina to have a sitsit party, that our friend Mikko, an Aalto Fellow 2014, had organized. Amazing venue, great food and local wine were just what the group needed after being on the road for over 24 hours and navigating in the hectic Cape Town. In addition to the Fellows, there were also Finnish and German exchange students from Namibia in the sitsit party, which gave us a great opportunity to hear more about southern Africa’s culture, situation and what’s it like to live in here. After the sitsit party we headed back to the center for a beer and then went back to the hostel exhausted – the traveling and the first day were behind so it was time to get some rest for the rest of the weeks excursions! 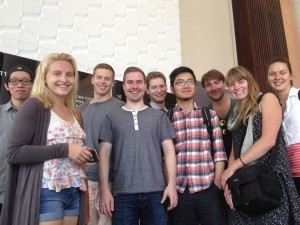