Fortune favors the brave—Both in Science and Entrepreneurship 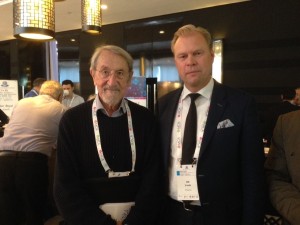 Aalto University boosted entrepreneurial spirit at a Morocco-based conference promoting peace in the Middle East. Courage is something both entrepreneurs and scientists need. This is why Olli Vuola, Director of the Aalto Ventures Program, decided to make it the main theme of the entrepreneurship workshop he had been invited to hold at the Bridge to Peace conference in Morocco in November 2015. The aim of the conference was to promote peace through science. The audience consisted of experts and researchers from different fields, including four Nobel Prize winners, and representing 16 different Middle Eastern countries. To get a younger generation’s perspective on matters, Vuola invited Slush President Marianne Vikkula and Slush Head of Partnerships Ghita Wallin, both students at Aalto University, to join his workshop team.

The participants of the conference workshop were first divided into groups. In the groups, people from different backgrounds, including Arabs and Israelis and Shiites and Sunnis, discussed what methods they have used to overcome their fears. At the end of the workshop, the participants presented their personal experiences and the results the groups had achieved.

According to Vuola, overcoming fears plays a key role not only in entrepreneurship and science, but also in peacebuilding.

‘Fear prevents us from taking action. The fear of becoming an outcast is strong in the Middle East: collaborating with the opposing side may lead to being isolated from your own community. Overcoming one’s fears and conquering the fear of failure is also the first step of entrepreneurship’, Vuola says.

‘The Finnish word for entrepreneur can be translated as tryer. Thus, an entrepreneur is someone who tries and tries again despite potential failures. One of the topics discussed in the workshop was that there has recently been a trend to make failing more acceptable in Finland, for instance by celebrating National Failure Day’, Vikkula says.

Courage is always needed whatever your career choice is. Vikkula points out that the workshop did not aim at turning scientists into entrepreneurs.

‘The purpose is not to make all research commercialisable or to turn all scientists into entrepreneurs. However, scientists may also encounter situations where they seem to be at a dead end or facing an insurmountable problem. These are times when courage and self-confidence are needed.’

Vuola and Vikkula emphasise that becoming an entrepreneur is first and foremost a mental process. As a result, the entrepreneurship studies provided by universities should be comprehensive packages.

‘Students need to have the opportunity to learn by doing, such as in the Aalto Ventures Program. It’s also very important that inspiration, role models and a support network are readily available, as is the case at Aalto University. It’s perhaps not possible to teach students courage as such, but feeding their courage is definitely possible’, Vikkula says.

The idea also impressed the scientists who were originally very sceptical about the workshop. ‘Scientists have to be critical towards their own ideas, whereas in entrepreneurship this approach is not fruitful. Entrepreneurs have to have faith in their ideas. One of the Nobel laureates approached us after the workshop and told us that we had made him wonder whether researchers are sometimes even too sceptical about their ideas. Everyone needs creative madness and strong confidence sometimes’, Vuola sums up.