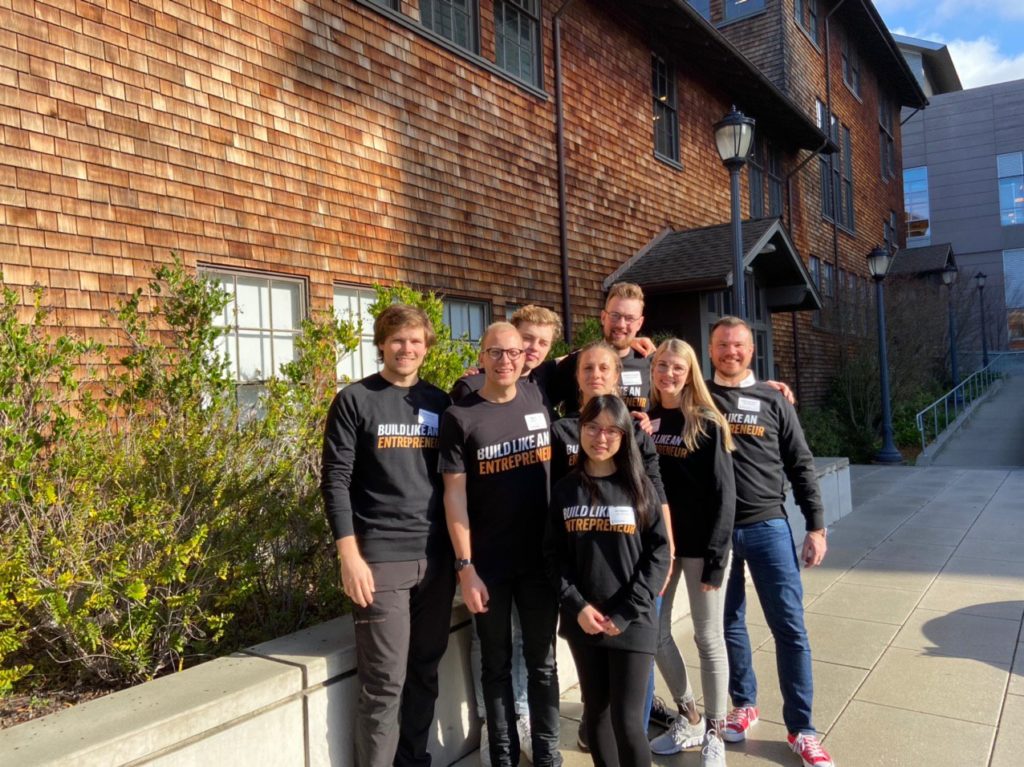 In January 2020, AVP gathered four students from Aalto University and sent them to participate in the Berkeley Method of Entrepreneurship (BMoE) Bootcamp in Berkeley, California. This was an intensive 4-and-a-half-day workshop consisting of not only lectures and interactive classroom activities, but also of mentoring sessions that facilitate teams to develop their own startup ideas.

Take a sneak peek behind the scenes as Tapio and Emilia share their bootcamp experience!

Participants from over ten countries had gathered at the UC Berkeley campus to craft their startup idea and pitch. For an aspiring entrepreneur, my motivation to join the camp was to learn both hard and soft skills for my entrepreneurial journey. Around three-fourths of the 120 participants were Berkeley students meaning most teams only included one international student. Prior to the bootcamp, I knew that Berkeley is one of the world’s top universities and feared that students there would be on another level leaving little room for contribution to us less boisterous, non-native speakers. This preconception turned out to be wrong: although bright and active, the students were very accommodating and valued foreign students’ opinions. One striking difference between US universities and Finnish ones is the students’ age since in the US you usually go to university straight after high school. This meant that I was teamed up with people a couple of years younger than me, and to some this was their first experience in the realm of entrepreneurship.

This did not stop us from developing our idea of a browser extension that lets you order items to nearby local businesses. I quickly understood that in Finland we have a lot more options to get our packages delivered than in the US. At least if you are not willing to risk your package being stolen, which unfortunately is very commonplace. Thanks to my experience from back home, I was able to contribute to the project a lot while also learning from the locals what could and could not work there. Our group effort throughout the bootcamp week truly was a testament to the strength of diversity. At BMoE, however, the startup idea itself is not the only thing you will be working on. The program focused also on developing communication skills, teambuilding techniques, and other useful soft skills.

The BMoE bootcamp highlights how to stand out and communicate your idea, which appears to be a critical success factor in Silicon Valley.

“How would you sell an avocado to a Siberian investor?” A keynote speaker and presentation coach, Nathan Gold, incites the audience to pitch one-liners in the spur of the moment on the second day of the camp. The prompt is just one of the ways the students at BMoE are encouraged to partake in the talks. For an introvert who likes to think before answering, this was definitely beyond my comfort zone. While Nathans’ question is trivial, the answers students come up with are creative. It appears that engagement with the speakers comes naturally to most Berkeley students. During the breaks, the hallways are filled with chatter and small talk, as students, coaches, and mentors mingle among each other. Once I sensed the cultural difference and the emphasis of the course, I decided to replace my original objective of building a venture with honing my communication skills.

The BMoE bootcamp highlights how to stand out and communicate your idea, which appears to be a critical success factor in Silicon Valley. The message that the coaches and mentors send is clear: besides a good product, you’ll need a great story. BMoE teaches students to tell stories by ditching them into cold water. After the first day of building a venture, the teams get to pitch their talk in an elevator to two venture capitalists. Only two teams secured a meeting from the VCs, and it turns out they were the only ones asking for the meeting. The following day, the teams presented their ideas to a jury and an audience. The method is painful yet effective. After a week at the BMoE, I feel that I grasp the essence of what it is to be an effective communicator and how to catch investors’ attention.