In the middle of the night after Wappu of 2021, a conversation at the dining table was bubbling while a pot of pasta in the kitchen was doing the same. Different accents and varieties of Spanish took over the space to discuss topics ranging from the Finnish weather to the current state of reggaeton music.

– Yesterday was good fun!
– Yeah, I don’t feel so good today, though.
– I think that is quite common after Wappu.
– True, although corona has made these sorts of celebrations kind of weird.
– How do you like Finland and the University, by the way?
– It is nice, I enjoy it, but there is this thing at school…

Escalating quickly, the conversation shifted to Eurocentrism and the need for a transformation of their intellectual and social surroundings. As members of the Latin American community, each voice around the table began to weave a thread of intersectional stories through concerns, emotions, and loud, passionate expressions. The depth of the discussion overrode the superficiality of yesterday’s celebrations. They all understood something was missing and felt the same restlessness and vigor, the need to change the current unrepresentative systems that dismissed them. This exchange of ideas and feelings resulted in the collective embracement of a topic they felt wasn’t discussed in their current environment.

– Wait! I have to take the pasta off the stove!
– But what should we do about this stuff at uni?
– Can we do something?
– I don’t know, maybe?
– Is the pasta gluten-free?

Unknowingly, a seed had been planted that would eventually sprout into S.U.R. — already more than just a concept, but a necessity in the current Finnish academic and social environment. S.U.R. currently defines itself as a decolonizing collective based on the understanding of the Global South (sur is Spanish for south) not just as geography but as a way of standing, experiencing, and dancing through the world. It started as a group of friends who met at Aalto University but expanded to a broader audience in the Helsinki metropolitan area.

Attempting a decolonial transformation takes a lot of time and energy.

Like its acronym, S.U.R. fluctuates in forms and strategies; it does not have a fixed meaning. It can mean anything from Sharing Utopian Resistance to Solving Unfair Representation. S.U.R. adopts a flat hierarchy, shares decentralized and embodied knowledge, and — cohesively with decolonial strategies — strongly acts according to feminist values. 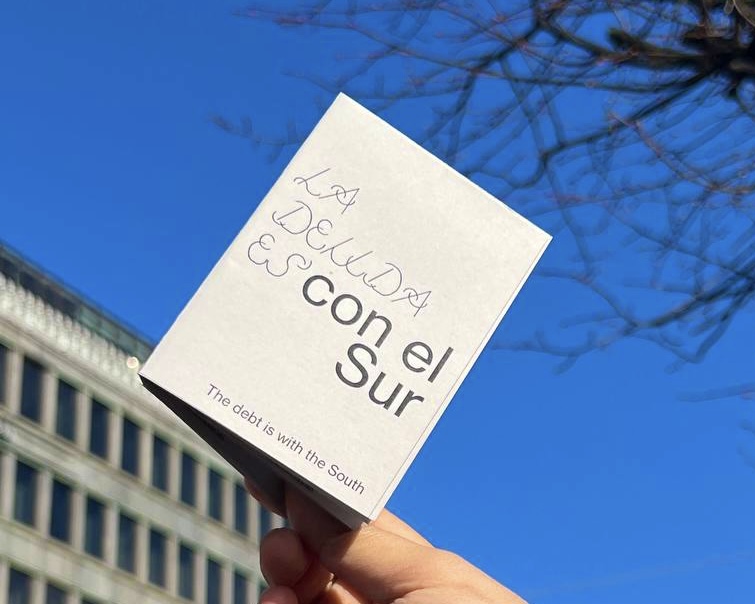 The debt is with the South: a zine distributed during climate crisis protests in Helsinki.

Throughout the following months, the jumpstart was fuelled by the active need to look away from the Eurocentric perspectives they encountered so often around them — which constantly dismissed the true potential of diverse thinking and experiences. The members of that post-Wappu pasta dinner continued to get together and unravel insights, literature, and social movements happening in Latin America and Europe.

Without even realizing it, they had grabbed entrepreneurship by its horns.

It was a rough start. Attempting a decolonial transformation takes a lot of time and energy, mentally, physically, and emotionally. Like anyone who has taken part in activism or social movements and protests, the members of S.U.R. went through a web of questioning and obstacles that initially hindered them but ultimately fuelled their belief in the need for change.

– What were you expecting? Non-Eurocentric perspectives in Europe?
– If Europe is talking about internationality, diversity, and global issues, they cannot keep dismissing us as just a subject for exploitation.
– But if you don’t like it here, go back.

The objective of creating S.U.R. was not to start something unique and big that would act as a model or that would give individuals power or profit. Instead, S.U.R. aims to create, collaborate and be in constant dialogue with existing organizations and institutions. It wants to start the change from within and tie connections between the Global North and the Global South. Through entrepreneurial and self-organized actions, S.U.R. highlights topics of social and climate justice. At the core of the dialogue are currently two things: Firstly, the lack of fair and real representation in the self-claimed diversity presented by academic institutions, and secondly, the dismissal of decolonization as a strategy to achieve sustainability.

– How can we bring unheard voices and unseen perspectives to light from our position of privilege?
– But how could they leave out the Global South when talking about sustainability?
– What about the ecological debt caused by industrialization and colonialism in Europe?
– What’s the plan?

Most of the members of S.U.R. are currently studying at the school of ARTS, which — almost paradoxically — drove them away from the term entrepreneur and the environment of entrepreneurship. The fear of being associated with the stigma of Silicon Valley-style startup entrepreneurship was enough to make them believe they weren’t entrepreneurs, not that kind at least. However, the entrepreneurship tools they were so reluctant to use were the same tools utilized in all those social movements and revolutions they applauded, just used in a very different way for a very different purpose. Eventually, they started to do things by themselves, just like entrepreneurs. Without even realizing it, they had grabbed entrepreneurship by its horns and driven it into a journey of decolonization, not only of their environment but of their own minds.