Everyone loves a startup success story, but to be honest, most startups don’t become such. Paavo Vallas, an AVP alumnus and founder of Särkifood, had it all figured out and business was thriving — for a while. This is not Särkifood’s story, but Paavo’s. It’s a story of how a startup can fail, but its founder can still find success.

Even as a child, the environment was close to Paavo’s heart. Growing up in the rather small town of Hollola, he developed an interest in biology and chemistry, and an urge to make an impact. That urge led him to apply to Aalto University in 2012 to, as he puts it, study saving the world.

The program that caught his eye was called Bioproduct Technology — or Biotuotetekniikka in Finnish. It sounded exactly like what he was looking for: something futuristic that could help the environment. And as a bonus, he could get in with his matriculation exam results.

However, he didn’t quite read the small print. Bioproducts turned out to be mostly forest products, and making paper out of wood wasn’t exactly what he had thought he signed up for. “It was branded well, I’ll give them that,” Paavo says. “It wasn’t what I expected, but I made good friends and got Environmental Management as a major, which sounded really interesting, so it wasn’t too bad.”

The major didn’t turn out to be exactly what Paavo hoped either — too much bureaucracy and not enough real impact. He made it all the way to Master’s level, though, before the final blow: Aalto discontinued the major. Paavo had a study right to a major, but there were no courses for him to take. What seemed at first like another disappointment proved to be the best thing that happened to Paavo at Aalto University.

As the university couldn’t offer Paavo courses in his major, he was allowed to take any courses from Aalto or from the University of Helsinki that related to his studies. Now, Paavo had full control — he could do what he originally wanted to do, to study saving the world. In addition to taking the best sustainability-related courses he could find, he decided to turn to entrepreneurship. “I realized that’s where the real impact could be made; by creating something new, not doing what everyone else was doing,” he says. Soon, Paavo found his way to Aalto Ventures Program.

Paavo went through the whole AVP Startup Minor, but it was on Startup Experience where Särkifood was born in 2016. “Out of all the courses at Aalto, Startup Experience had the biggest influence in my life. I’m really glad I took it,” he says. Right from the start, Paavo wanted to pursue impact rather than profits only. Now, everyone who takes Startup Experience must focus on solving problems related to the UN’s Sustainable Development Goals, but in 2016 this was not required — for Paavo, it was only natural. “I know making the world better through entrepreneurship is kind of a cliché, but that’s what I wanted to do,” he says. While on the course, he had the initial idea and found himself a team to get started with. 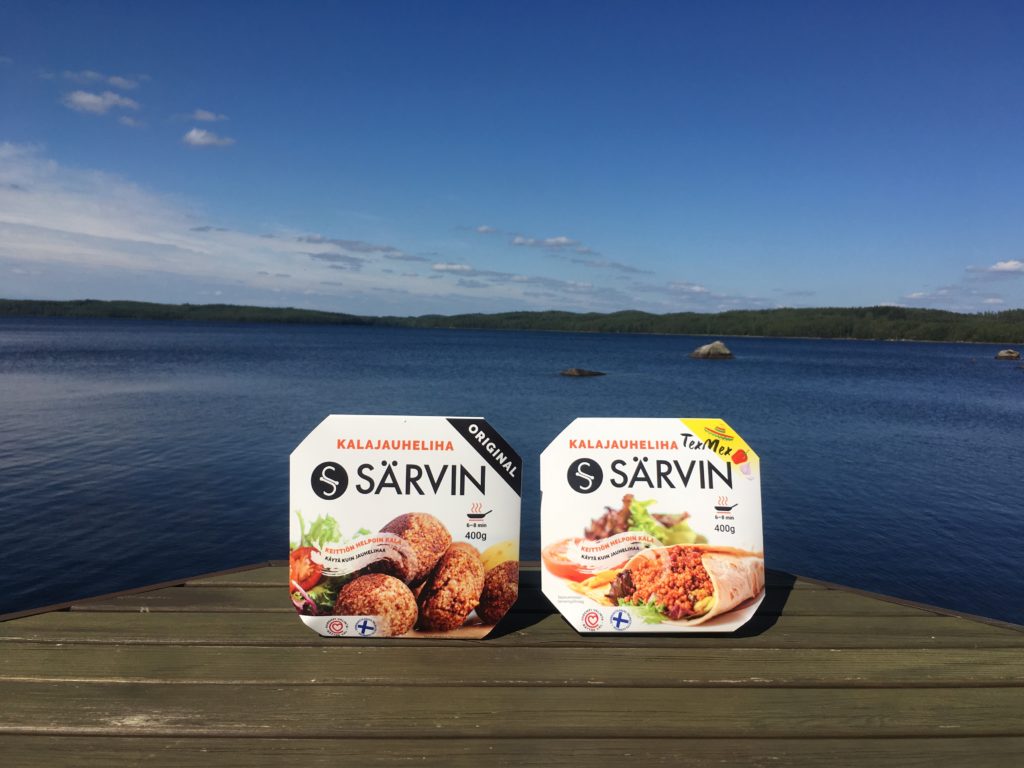 Särkifood’s product, Särvin, is a fish mince made from bream, a cyprinid fish that is harvested for environmental reasons.

Särkifood was based on the realization that there is a huge number of cyprinid fish species such as bream and roach in our waters, that are harvested for environmental impact only. Decreasing the number of these fish removes excess nutrients and improves water quality. If they’re already being harvested, why not put them to use as food, thought Paavo. Of course, he wasn’t the first to think that — it’s a pretty obvious thing to consider when you hear about the whole process. However, he actually decided to do something about it — and that’s what matters. “The idea doesn’t need to be so clever or unique, and it’s not bad just because no one’s acted on it yet. The world’s full of good ideas, but not doers.”

The world’s full of good ideas, but not doers.

Paavo realized that the fish industry isn’t perhaps the most innovative, and that’s what he considered an opportunity. “There are so many intelligent and entrepreneurial people in Finland alone, but how many of them end up in the fish business? No one,” Paavo says. Evidently, at least one did. In his chosen industry, being the greatest innovator in the field would be far easier than in, say, IT or energy. By focusing on an impactful solution in an industry where innovations are scarce, Paavo could be, well, a big fish in a small pond rather than fighting against a whole ocean of competitors.

After a successful proof-of-concept during the course, Paavo participated in a competition by Sitra — and won. With 10 000€ of initial capital as the prize, he was ready to set up the company for real. It was a good time to get started as Paavo was still a student, enjoying all the benefits of inexpensive living and constant learning.

The first task was to make an actual product. In Särkifood’s research and development facility, also known as Paavo’s small student apartment, he created a fish mince made from bream, called Särvin. There wasn’t much faith in the product in the industry — everyone believed it was salmon that brought in the money. Still, they promised to help, and Paavo was able to get his product into the mobile food market service Eggspress. Quickly, Särvin became one of the best-selling items. “I realized then I had made an actual product, something that people were buying. That was groundbreaking for me,” Paavo says.

Encouraged by his success, Paavo applied to the first season of the TV show Suomalainen Menestysresepti (roughly translated ‘A Finnish success recipe’) in 2018. The winner of the show would get their product to all S Group’s grocery stores — an invaluable reward for a new, small player in the market. Paavo made it all the way to the finals, and even though he didn’t end up winning, S Group decided they wanted all the finalists’ products in their selection — including Särvin. 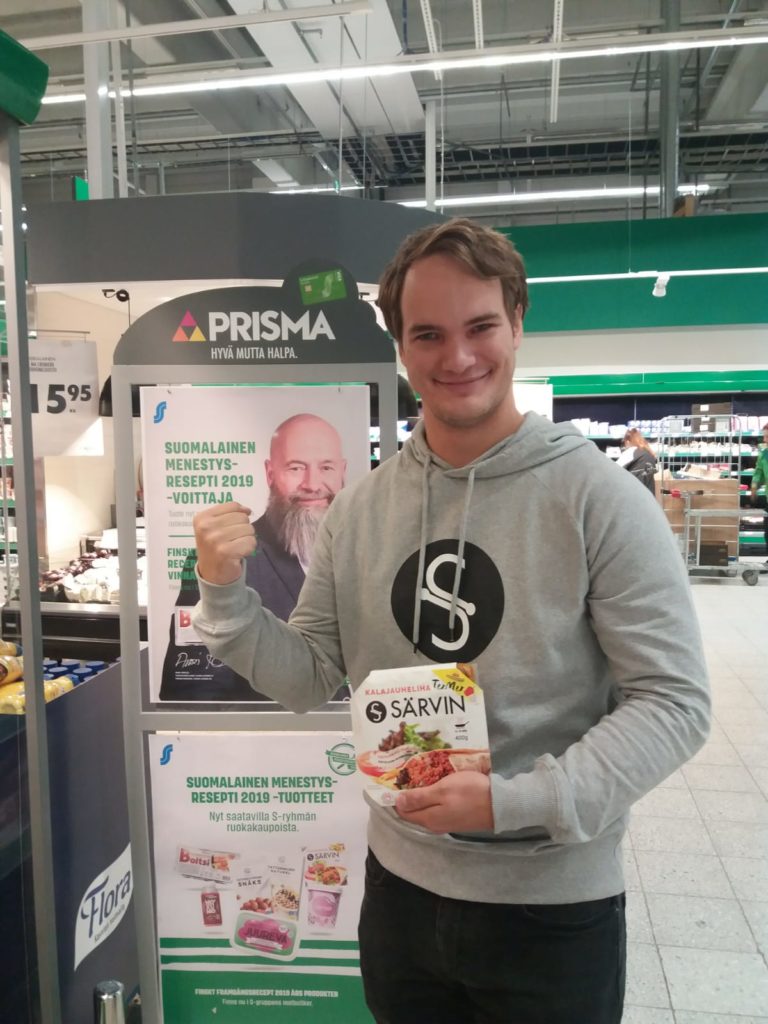 Särvin was one of the finalists in the TV show Suomalainen Menestysresepti.

This started a hectic time for Paavo and Särkifood. Producing enough Särvin for all S Group stores in Finland was hardly possible in his studio, so he found a subcontractor. One person couldn’t possibly meet all the requirements S Group had for their suppliers, so he negotiated a different deal. There was an issue with supply management systems, so he stayed up until 5 am to manually input how much of Särvin should be sent to each of the over 900 stores.

At the end, when the day finally came when all the finalists’ products were supposed to be in stores, it was only the winner and Särkifood who had made it out of the six finalists. “I don’t usually drink coffee, but I might have had a couple of cups back then. It was intense, but this was immensely important to me. I wasn’t going to let the problem slow me down, and was determined to fix it no matter how much work it took,” says Paavo. That’s some entrepreneurial mindset if we’ve ever heard of it.

For a glorious moment, Särkifood was the largest player in the business. Paavo was finally the biggest fish in the sea. But then things started to go wrong.

In late 2019, Särkifood’s subcontractor went bankrupt. Paavo had no way to produce enough Särvin to cater to nearly 1000 stores, so the product was pulled off the shelves. It took eight months to find a new manufacturer, and Särvin was re-launched in 2020. The momentum, however, was gone. “When Särvin was first launched, I had S Group’s massive marketing campaign and the publicity from the TV show to help people find the product. A year later, I had neither,” Paavo explains.

With the business dead and the passion dying, it was time to call it quits.

The sales declined, and in April 2021 Paavo got the bad news — the amount of Särvin ordered by S Group was zero. No call, no email, just a zero on the order sheet. Paavo was devastated. Around that time, he also developed an unexplainable allergy to cyprinid fish, meaning that he couldn’t even eat his own product. That was the final nail to Särkifood’s coffin. “It was a one-man business, based on my passion. With the business dead and the passion dying, it was time to call it quits,” Paavo says.

Even though Särvin had met its end, the company Särkifood was still alive and Paavo was not about to give up entrepreneurship. One of his biggest lessons from AVP was that one should only take risks that one can handle if they come true. Thus, he had not asked for any external funding to not lose other peoples’ money. “I took a risk, but a controlled one. I knew that even if I fail, as I did, the worst case was I’d have lost a couple of years before getting a job. With 40-something years left in the working life, that didn’t feel too bad.” 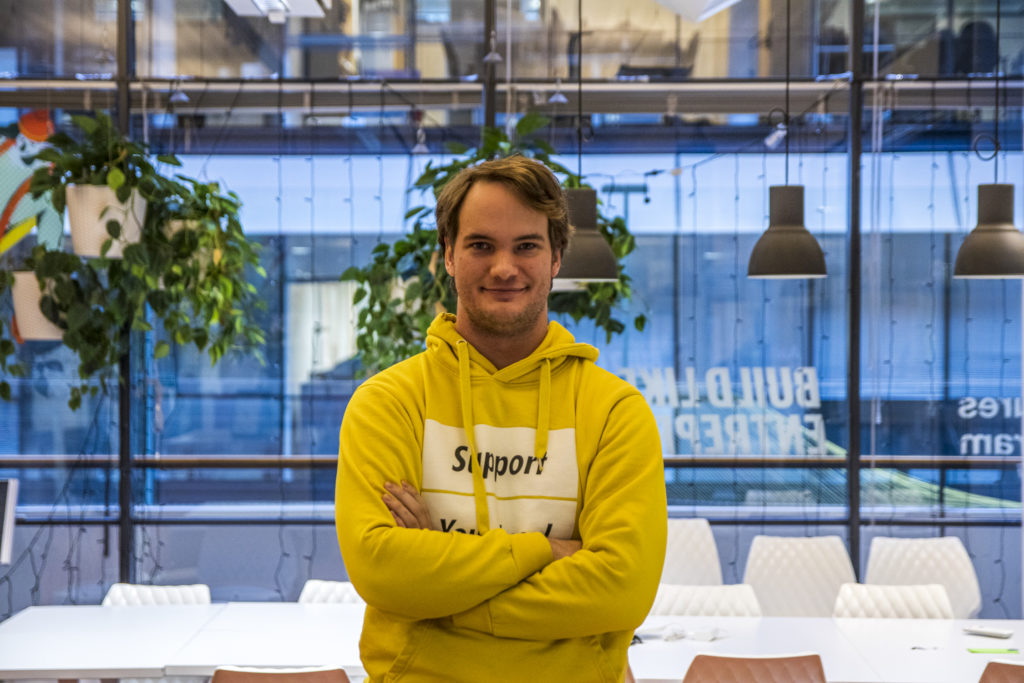 Paavo already has several new ideas to pursue after Särkifood.

However, it seems getting a job can still wait a little bit longer. “I have like 15 ideas on my laptop, waiting to be realized. I’ve reached a point where the failure with Särvin doesn’t feel so bad anymore. I’m ready for new challenges,” Paavo says.

One project is already underway, in collaboration with the PdP course at Aalto University. Paavo is working with one of the teams to find out if they could prevent ice hockey sticks from snapping in a crucial moment by measuring the small changes in their structure. Fitting, since Paavo’s very first experience with entrepreneurship was sharpening ice skates. He has a team and an idea, and they’re applying to Ignite next. Paavo would love to get in, of course, but what’s important for him too is to find out if their idea is realistic. “Even if we fail, we’ll have succeeded because we’ll have learned why this doesn’t work.”

Even if we fail, we’ll have succeeded because we’ll have learned why this doesn’t work.

That’s what it means, really, to be entrepreneurial. To see a problem, and instead of letting it be or just complaining about it, find out if one could solve it. If it turns out one can’t, it’s not a failure — it’s a lesson. “Either do something about things or accept them as they are. That goes in all walks of life, not running your own company,” Paavo puts it, and we agree.