In 2016 Nobel prize in economics has been awarded to UK-born Oliver Hart and Bengt Holmström of Finland. We were honored to get Bengt as our Thought Leaders’ Talk guest!

“Hart and Holmström are two of the most distinguished economists of our time”. Leonardo Felli – The head of the economics department at the London School of Economics.

During his career, Bengt Holmström has studied real-life contracts and institutions, as well as potential pitfalls in contract design. This speech sheds light on innovations in research and why no innovation is done without imitation.

As a young student of mathematics and physics, Bengt Holmström has worked at Ahlström before moving to the United States. Now, more than 30 years later, he is an awarded economist at MIT, one of the most prestigious universities in the world. He has previously worked as a Professor at Yale University and is a member of the Aalto University Board. Meanwhile he is an active thought leader in economic policy discussions in Finland.

TLT is a series of keynote speeches with prominent entrepreneurial leaders hosted by Aalto Ventures Program. 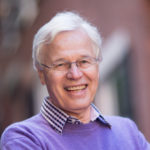